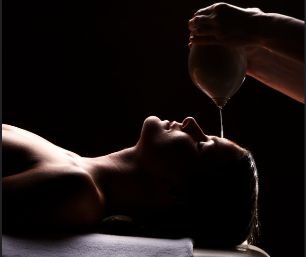 Shirodhara is both a profound and subtle experience. Traditionally, this treatment is given daily in a series that lasts a week to twenty one days or more in the Ayurvedic clinics of South India.

Shirodhara cleanses both the mind and the senses, allowing the body’s natural healing mechanisms to release stress from the nervous system. Whilst the effect is different for each person, Shirodhara is generally known to improve mental clarity and nervous tension. A thin stream of warm oil flows from a copper vessel suspended above the recipients forehead. Patterns of waves across the forehead or zigzags up and down the forehead trigger the body to enter an altered state of consciousness, further deepening a state of meditation.

This treatment in particular represents an interface between the traditions of Yoga and Ayurveda. Because it isolates and focuses the mind, it creates a meditative sense of awareness unmatched by any other treatment. Dhara, means “flow,” and is contained in the word dharana which is one of the seven stages of yogic realization. Dharana is translated as “concentration.” The flow of liquid in a shirodhara treatment is directed toward the ajna chakra, which is also known as the third eye. This area of the forehead, located slightly above the space between the eyebrows, is associated with the pineal, pituitary, and
hypothalamus glands, which dictate the organization and regulation of all hormonal secretions. These hormonal secretions control not only the autonomic responses which control digestion, breath, and elimination, but they are also responsible for our emotional state. Shirodhara effects the parasympathetic nervous system (also known as the “rest and digest system”), which conserves the body’s energy as it slows heart rate, increases intestinal and gland activity, and relaxes sphincter muscles in the gastrointestinal tract. This creates an ‘unconscious consciousness’ during treatment in which the primal intelligence of our body can reorganize in a manner that leads to healing and well-being.

Shirodhara is a curative as well as rejuvenating process that eliminates stress, improves vitality, and strengthens sensory organs. It helps to relieve insomnia, depression, anxiety, tension, anger, chronic headaches, rheumatism, hypertension, hair thinning, loss or premature graying, and gives mental relaxation. Shirodhara helps to overcome stress and its ill effects on
the nervous system. It is indicated in cases of depression, epilepsy, paralysis, and Parkinson’s disease.

Contraindications
Though shirodhara is generally a safe treatment, there are instances where it is not advisable. Because shirodhara causes the energy in the body to move in an upward direction (udana vayu), it is important not to use it when energy should be directed in a downward flow (apana vayu). For example:
 Third trimester in pregnancy
 During menstruation
 When breastfeeding
 Being under the influence of drugs or alcohol
 Brain tumors

It is also important to be aware of conditions where a calming treatment would
not be indicated:
 Lethargy due to high Kapha
 Very low blood pressure
 Severe debility
 Extremely high vata where the client is unable to sit still.

END_OF_DOCUMENT_TOKEN_TO_BE_REPLACED

END_OF_DOCUMENT_TOKEN_TO_BE_REPLACED
go back to the homepage