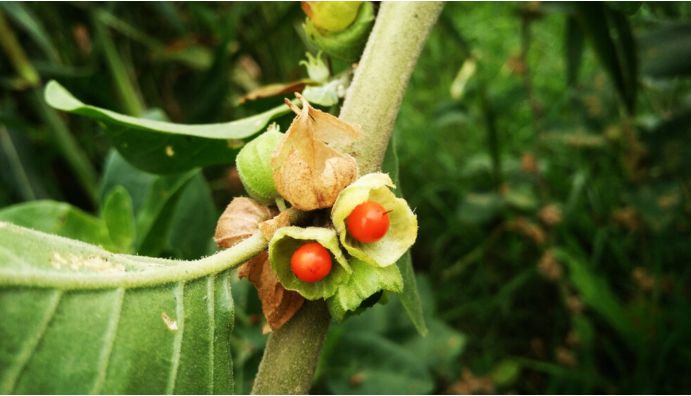 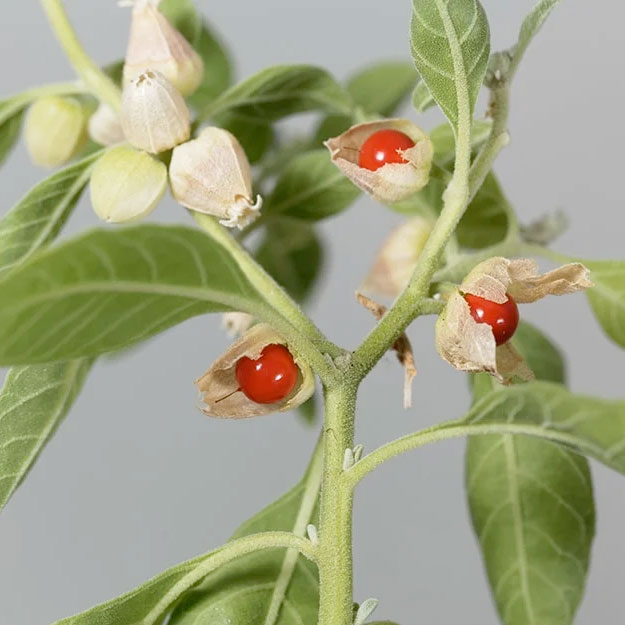 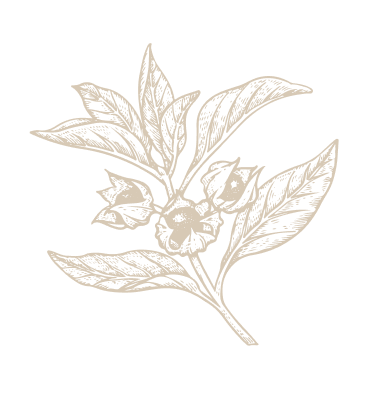 Ashwaghanda is an incredible herb from the Ayurvedic pharmacopeia that is increasingly popular amongst naturopaths and Western herbalists around the world. The name Ashwaghanda literally means ’smell of a horse’ and this name is a reference to its special ability to impart strength and vitality. Commonly known as Winter Cherry and Indian Ginseng it is an ‘adaptogenic‘ herb found in temperate regions of the Indian subcontinent and neighbouring Sri Lanka.

How do adaptogenic herbs work?

As is the case with all adaptogenic herbs (and some mushrooms), Ashwaghanda is believed to support the body’s natural ability to deal with stress by adapting its function in accordance with the specific needs of the body. Along with other adaptogenic herbs, it contains special chemical compounds that possess ‘opposing qualities’ such as stimulating and relaxing that can be triggered according to physical, chemical, or biological needs of the body.

What is Ashwaghanda used for?

Due to its adaptogenic properties and wide ranging benefits, Ayurvedic practitioners have traditionally used Ashwaghanda for a variety of ailments including anxiety, stress, improving energy levels, insomnia, thyroid issues, emotional instability, ADHD- type symptoms, impotence, low libidio, fertility and more! It has been used for centuries in traditional medicine as a potent aphrodisiac for both men and women. Many people believe Ashwaghanda to be ‘the herb’ for 21st century living due it’s dual action as both a tonic and a sedative all in one – meaning that it can increase your energy and calm you down at the same time! 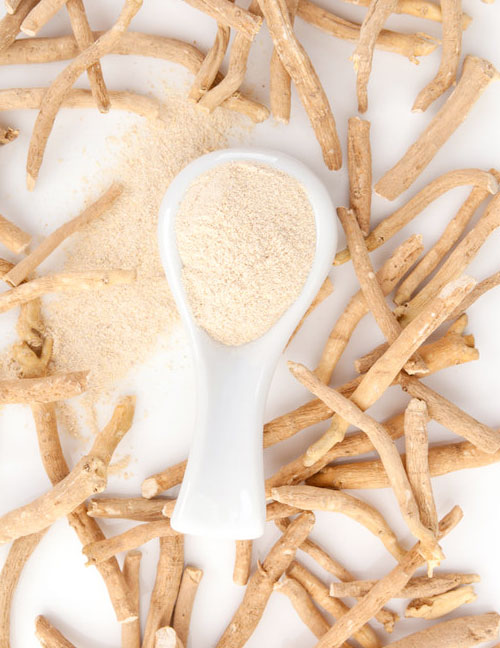 What does Ayurveda say about Ashwaghanda?

From an Ayurvedic Medicine perspective the primary qualities of Ashwaghanda include: heating (Virya), sweet (Vipaka), oily, hard, and heavy. It is especially good for balancing Vata people and Vata disorders. Ashwaghanda can be helpful for Kapha in small doses due to it’s warming action, but should be with caution where Pitta aggravation has occurred.
Ashwaghanda is considered a strength promoting and rejuvenating ‘nourishing nervine’ herb rather than a ‘heavy sedative’. It is used to promote the intellect, improve sleep, boost immunity and tonify the nervous system. For maximum tonic effect Ashwaghanda should be taken with Ojas enhancing carriers including: milk, ghee (clarified butter), almond milk, or honey.

Why purchase from us?

Commercially, Ashwaghanda root is graded into four qualities, and it is important to purchase from a reputable supplier to ensure maximum potency and purity. All herbs at The Medicine Man are Certified Organic, sourced and purchased through companies adhering to sustainable agriculture practices with manufacturing facilities routinely inspected for safety and compliance by European auditors.

Buy organic Ashwagandha powder and capsules in our shop:

Caution in excess pitta and ama with congestion.
Caution in pregnancy; although traditionally used in India during pregnancy to strengthen the uterus and health of the mother and child. Its spasmolytic activity on the uterus has led certain quarters of Western phytotherapy to restrict its use in pregnancy (McGuffin et al 1997).

No drug–herb interactions are known. There are some theoretical interactions between ashwagandha and immunosuppressant, thyroid and some sedative medications, but these are not evidence-based (Braun & Cohen 2003, 2004, Harkness & Bratman 2003). As ashwagandha appears to have some hypoglycaemic activity in humans it is advisable to monitor blood glucose in susceptible individuals (Low Dog 2002).
The Medicine Man provides referenced information for educational purposes only, and does not make any therapeutic claims for any of their products.
Please seek advice from a healthcare provider if you wish to use herbs for therapeutic purposes.

END_OF_DOCUMENT_TOKEN_TO_BE_REPLACED

END_OF_DOCUMENT_TOKEN_TO_BE_REPLACED
go back to the homepage